Drivers don't just hate cyclists, they hate each other..

So yesterday, i'm riding my bike home from work. Four way stop sign, a truck is stopping and a car behind it moves over to the right of the truck. (nearly cutting me off in the process). The car had their right turn signal on so it looked like they were going to turn right, but floored it and went straight anyway, cutting off the truck and causing it to brake to avoid hitting the car.

Then the truck floored it and stuck on the car's ass and when the car stopped at the next block (lots of four way stops on this section) the truck just kept going around it without stopping. Where are cops when this kind of stuff happens?

What's really funny about it, is that they were in such a hurry, wasting so much gas, breaking traffic laws, etc. and I, on a bike, pretty much caught up with them.

So, there I was at Trader Joes tonight, buying a couple bottles of 2 buck chuck and some frozen enchiladas. The lady there asked for my ID, which is normal I guess, but then when she looked at my actual age, she said she thought I was young, like 21 or something.. then another lady came over and tried to guess my age. She said 25. I'm 36 for the record... 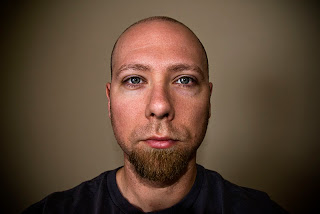 Bike ride to work was pretty good. Light traffic for some reason..

Afternoon, not too bad. Traffic was heavier, but seemed 'normal'.. for L.A. anyway.. overall pretty good..

I generally try to stay out of the door zone, but somehow I wandered a little close to the parked cars and wouldn't you know it, someone flings their door wide open causing me to hit the brakes (luckily I ride with my hands over my brakes in heavy traffic), slightly swerve in the small space I had after I took a quick glance to my left to make sure I wasn't gonna get squashed by a car/bus/truck, and curse very loudly throughout the ordeal. I think my squeaking front brake, along with the cursing, might've helped them notice me enough to pull their door slightly closed (not all the way of course), but enough for me to squeeze by and catch my breath behind a stopped bus.

I feel pretty lucky. I think if I were a couple inches more to the right, I would've been a goner, or if they had opened their door a second later. Whew.. what a weekend. First of all, it was 4th of July, so that made it a three day weekend, which is always nice. I don't feel like typing much, so I'll keep this short and sweet.. I just feel like I really should update this blog more often... So the title suggests, Anime Expo. I went on Friday and Saturday. Both days were full days.. woke up, showered, jumped on the subway, and wandered around the convention center all day long... I shot a few pics, mostly with my Leica.. but a few digital too. My friend Clement was hosting some Gundam model seminars, so I sat in on those too, even though I know all the stuff he talks about already :D 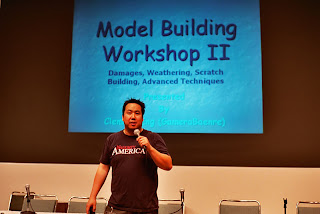 I watched a couple animes in the screening rooms.. mostly, just people watched though. It was fun, but I don't think this year was as fun as the last couple years. I'm not really sure why that is, maybe it's the anime they were showing didn't interest me as much, or maybe it's that everything felt smaller somehow.. dunno.. Anyways, after the show, we had dinner Friday night in Little Tokyo. It was pretty tasty, but the three beers I had made it even better. Thanks to Dave for giving me a lift home.. heh.. 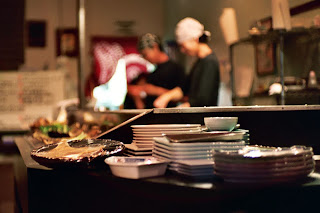 So day two (for me, technically day 3 of the show) was pretty much more of the same as day one. Wandered, took pics, I only took my Leica and one 50mm lens with me this time though, so that made things a little more interesting. It's funny how much attention that camera gets. I had quite a few people come up to me and mention it, or ask about it... that never happens with my other cameras. Speaking of cameras, I'm a little pissed. I lost my lens hood for my Tamron 17-50 f/2.8. It must've just got knocked off while pushing through crowds. I also lost the little cap that goes into the flash port on my M6... bummer...

see, look at all those people staring at my camera.. 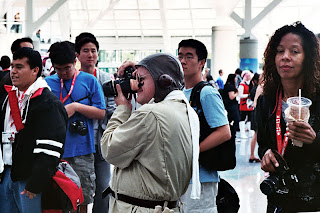 Forgot to mention, I won a trophy for my Cammy model kit I built. Sweet..