Just a small update, but it's something..

First is the headlights.  I added some plastic to the top and bottom leaving the slit in the middle.  I can't figure out what you call this type of light, but it seems to be used on all german vehicles in combat, while factory pics all seem to have 'regular' lights. 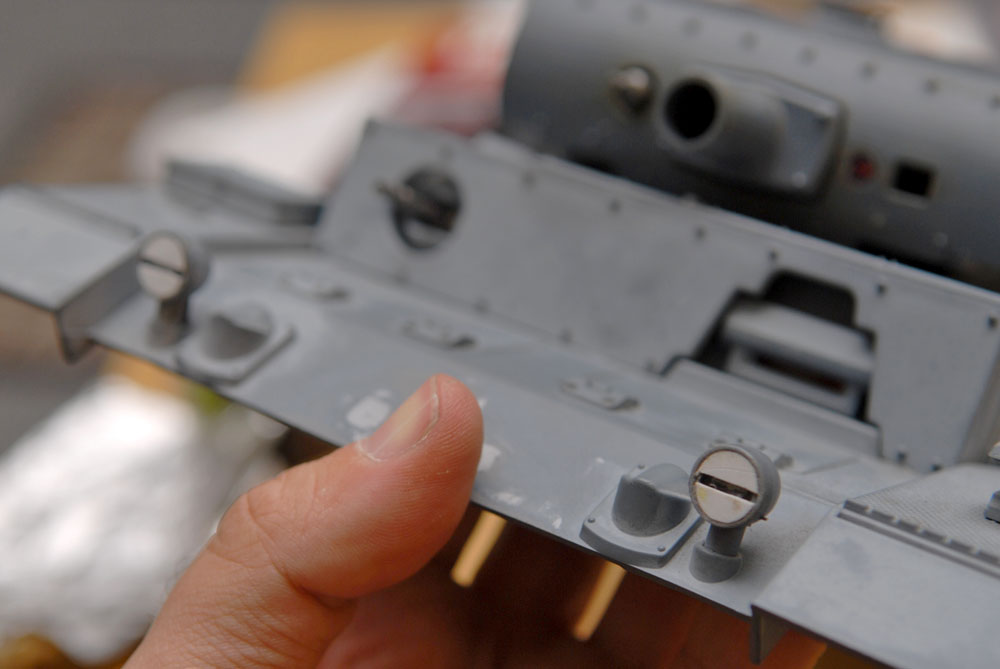 I built the inner frame for the intake vents out of styrene sheets.  It looks a little messy, but when the PE grills are on, and painted/weathered it should look fine. 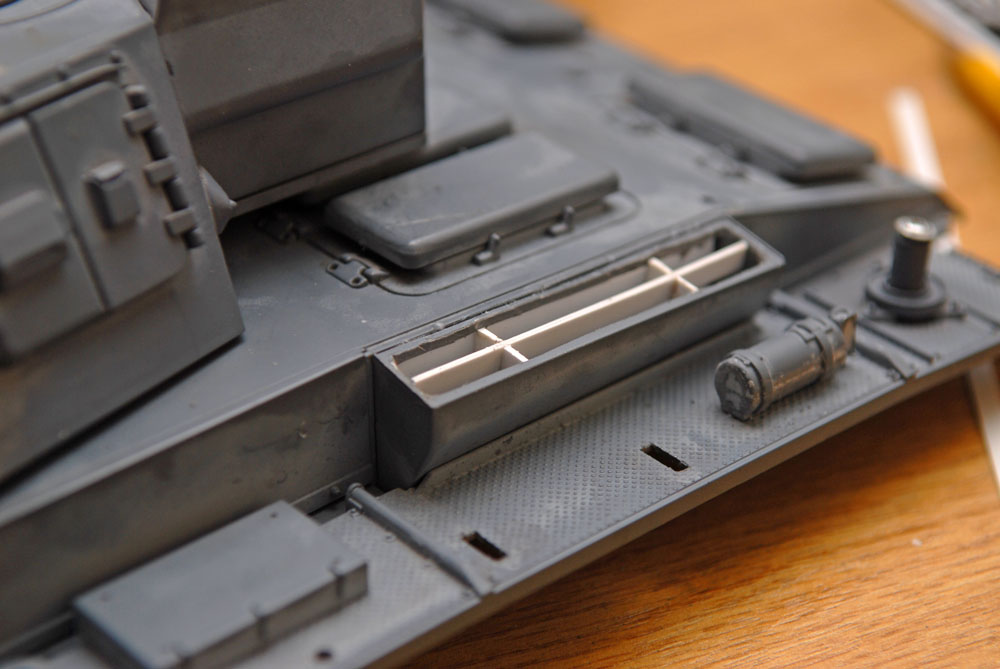 and last for now, I scribed some "wood grain" into the jack block.  Again, it looks a little goofy now, but after paint/weathering it should be good. 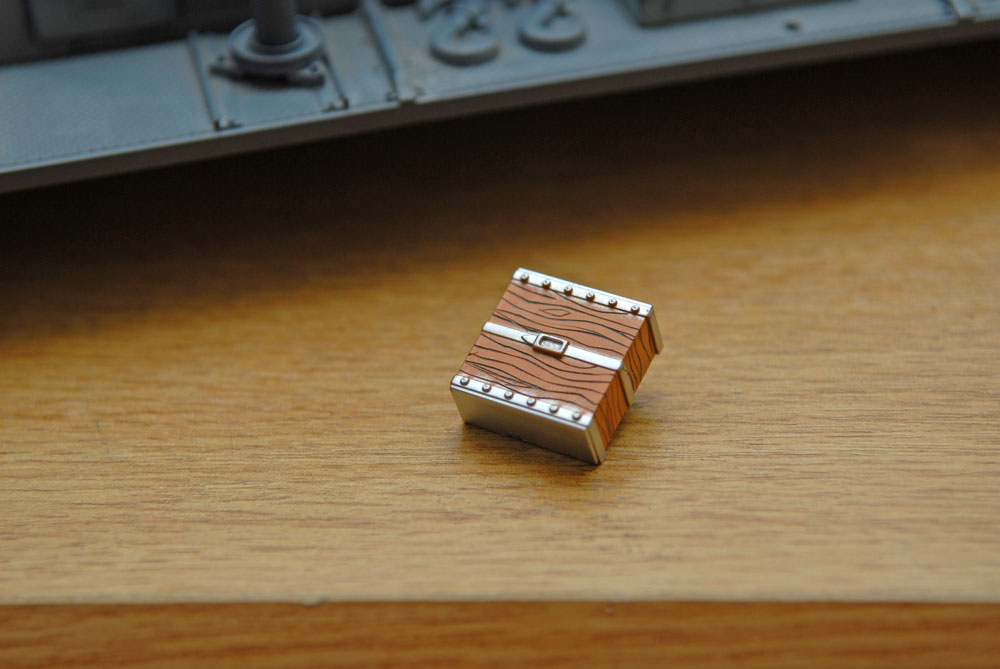 If it seems like I start projects and don't finish.. well, maybe that's the case, but not really, I just put it off for a while.  Still working on the MAK vignette.. still working on the Verthandi figure.  There are some Gundam mobile suits I have been working on, but lately what's been taking my time is this 1/16 RC Panzer III L.

I've had it for a couple years now.  I played with it for a while until the gears stripped.  Then I ordered some metal upgrade gears and put it aside.  Like I said, that was a couple years ago.  Well, last month, I got the urge to get back to it, mostly because I found a cool spot for tank play in Griffith Park and my other two tanks weren't working right.  So here we go.  This one I will finish soon.  I'm not superdetailing it, because it's just an RC runner, but I am doing some detail work to it because I just have to make it look cool..

First off, I bought a metal upgrade kit for it, which consists of metal drive sprocket, rear idlers, suspension, and tracks.  I also bought some rear idler adjusters, metal barrel to replace the airsoft barrel with a more scale gun, and some PE parts for the rear grill and tool clamps.

I decided to paint it in the DAK (Afrika Korps) desert yellow color.   In the end it should have some nice chipping effects and weathering.  So far i've gotten the lower hull done (minus the weathering) and am moving on to the upper hull.

The metal shocks are much more realistic looking than the old ones.  These are also the metal tracks.  I've tested it around my living room and they seem to work great. 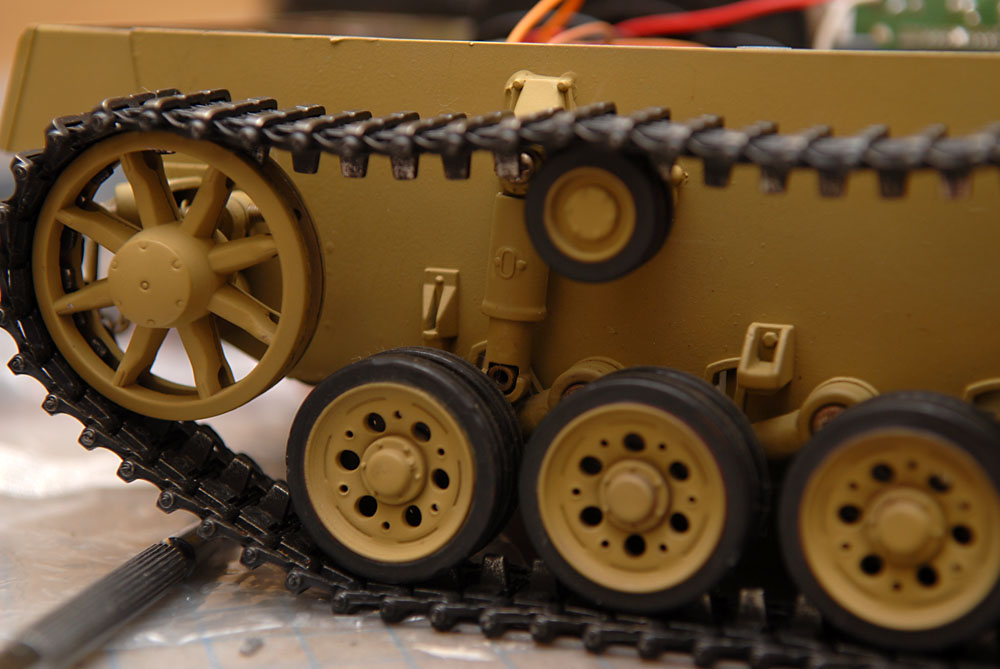 Next up, I replaced the front single molded spare tracks with some of the leftover plastic tracks.  I had to modify the front rack to hold them, but I think it's going to work ok. 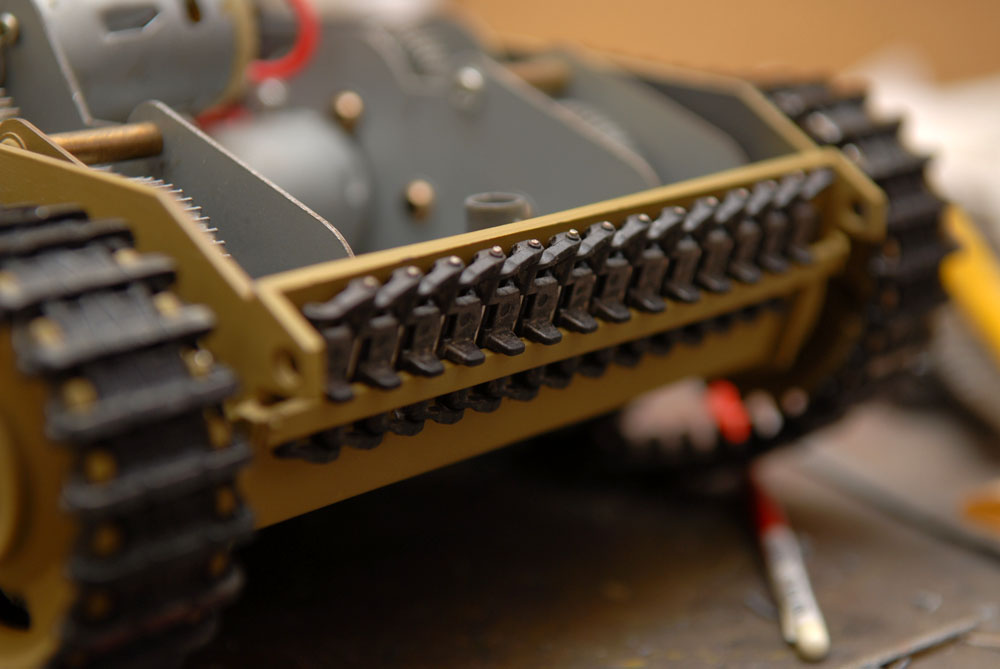 I added texture to the muffler and painted it.  You can kinda see it on the lower part.  That smooth top part isn't going to be visible.  You can also see the idler adjuster here.  It actually works, not just for looks. 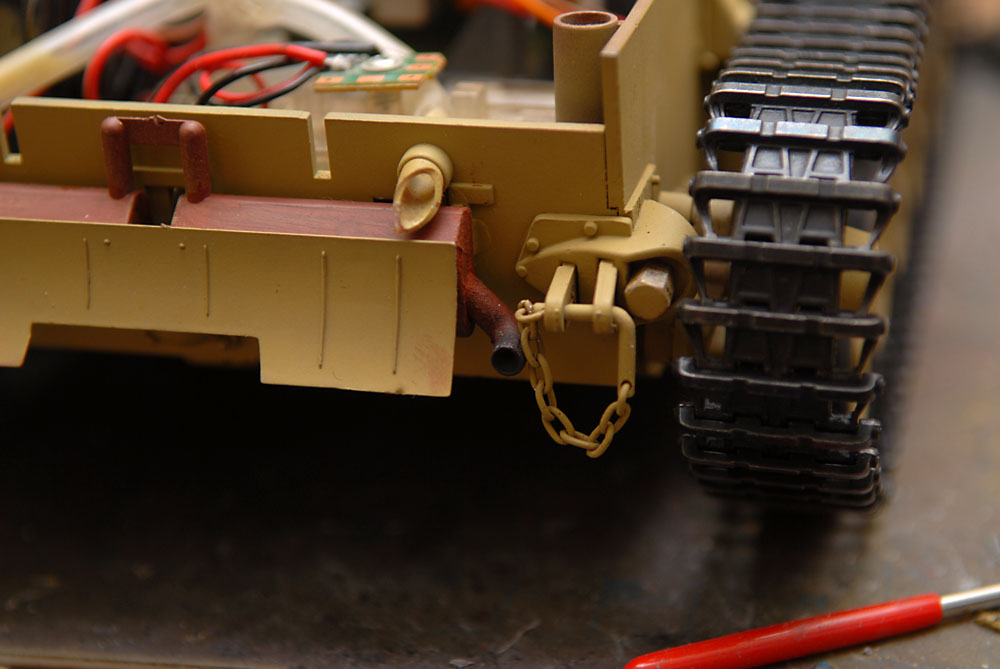 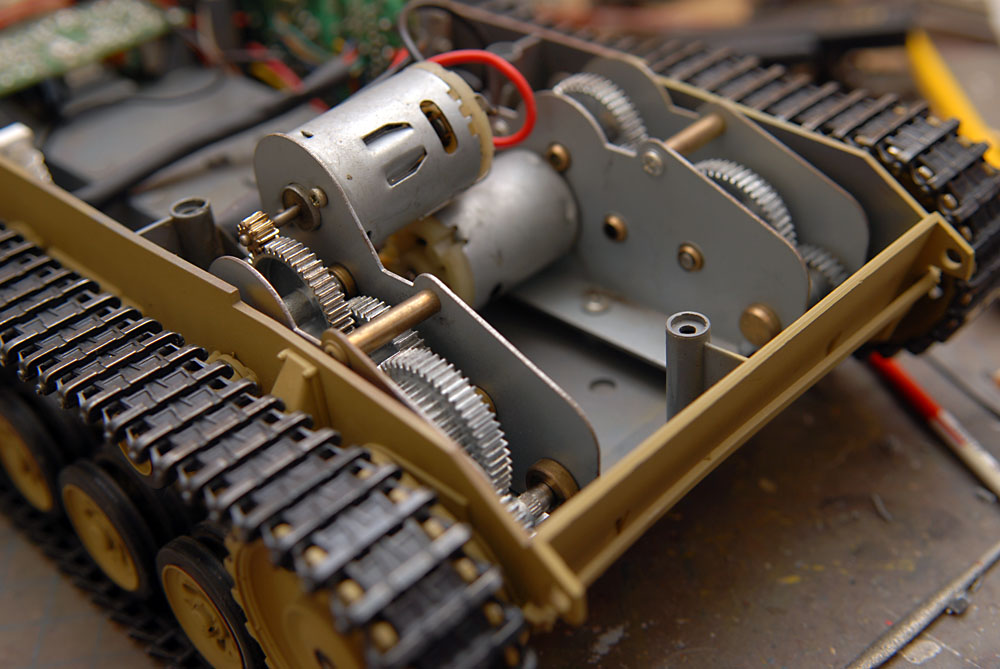 I removed the big 'rc' antenna on the rear deck and replaced it with this internal antenna.  So far it seems to work ok, but I have yet to test it outside at a further distance. 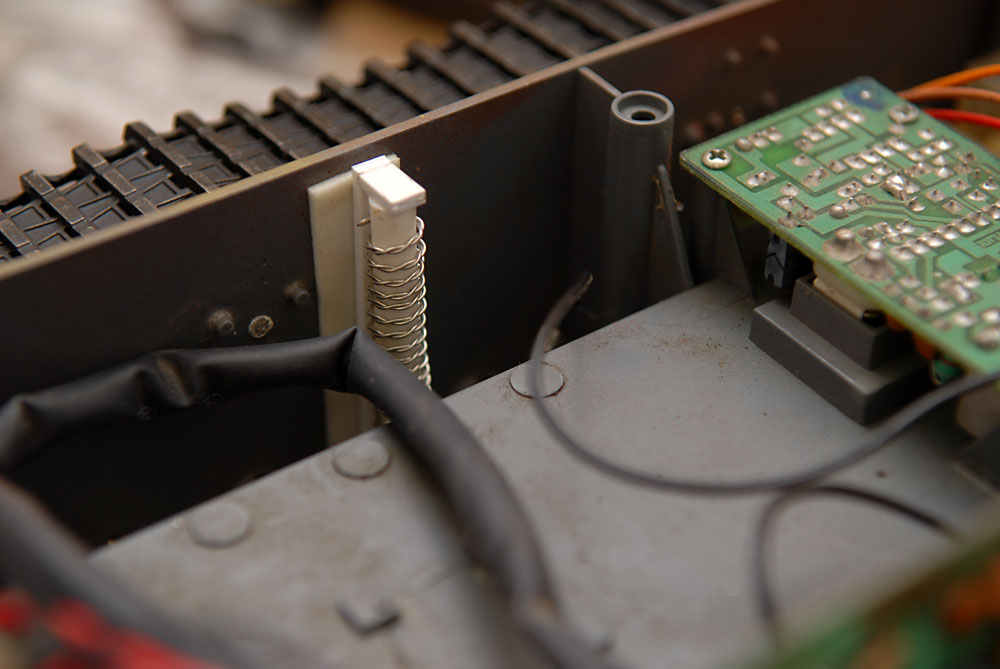 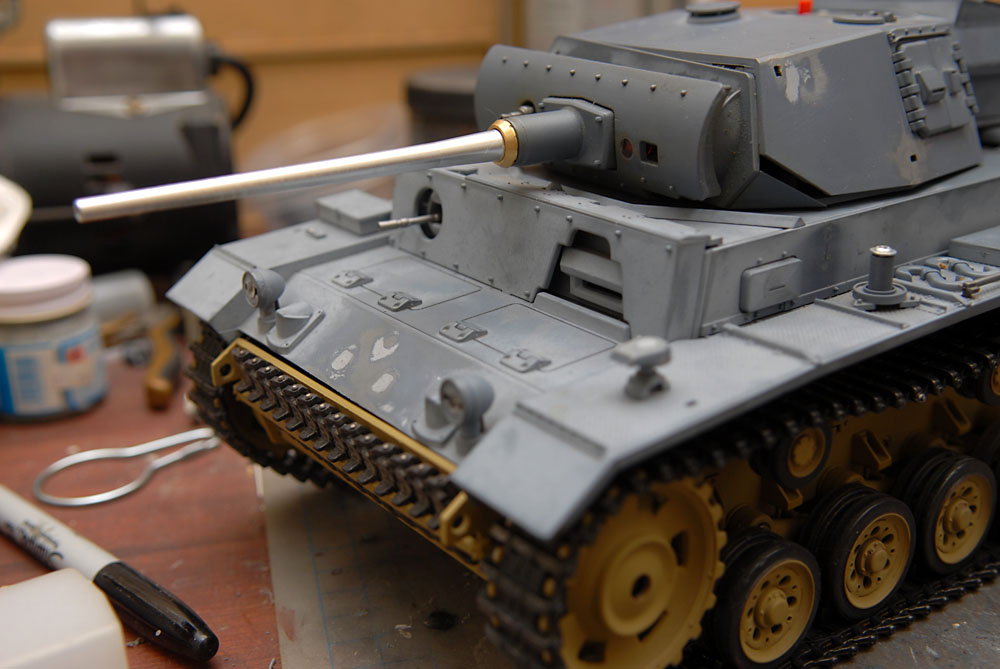 I fixed the crooked commander's cupola and moved the hatches so that they still open on the sides. 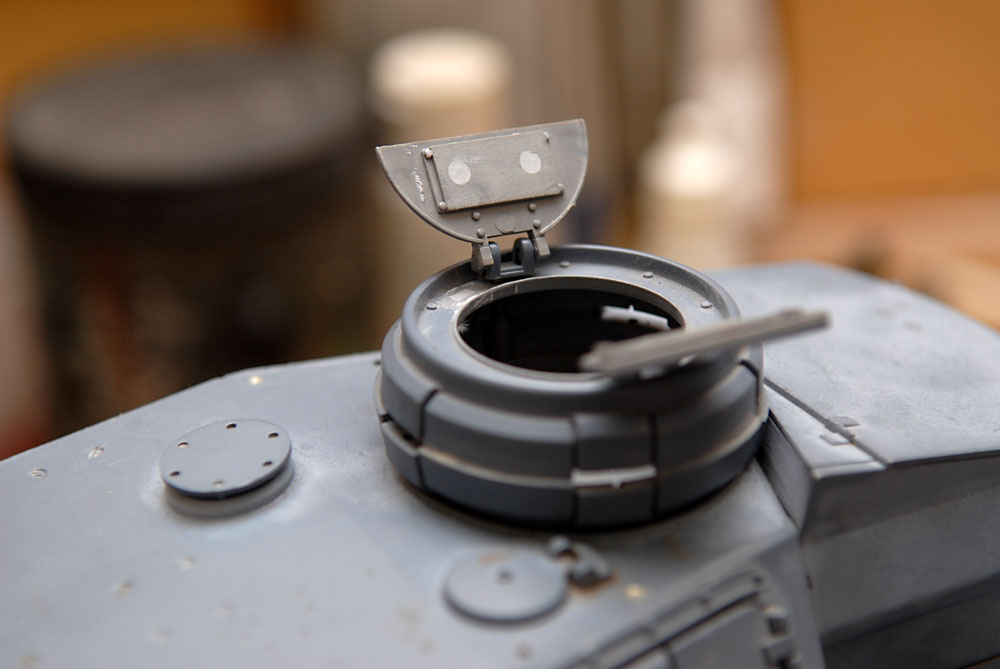 Metal grills required cutting the intake boxes on the sides.  I have to smooth it out some more, but they're on their way. 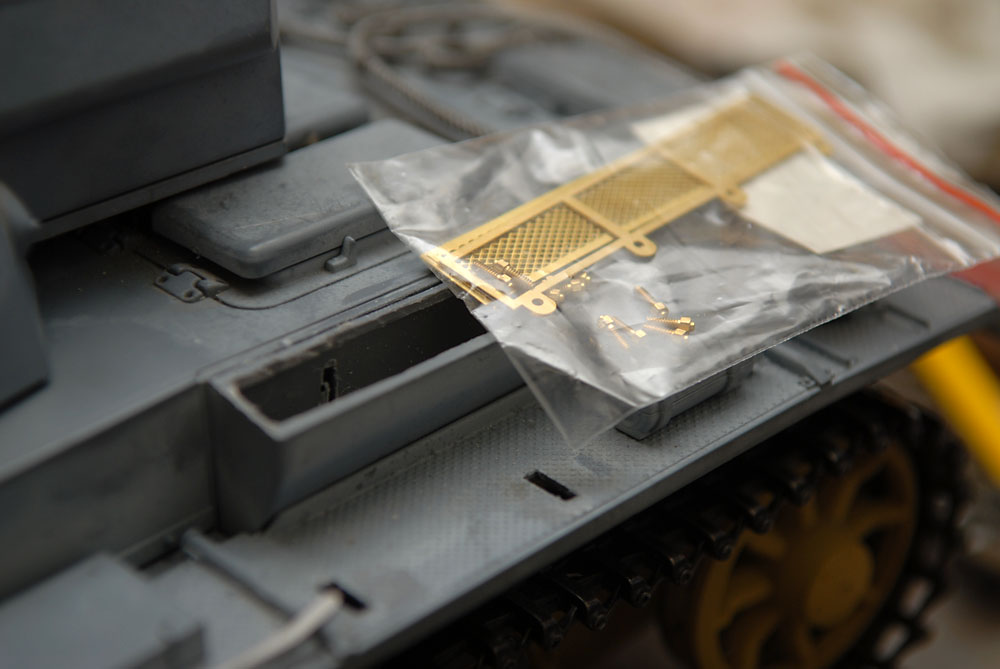 I cut the front lights in order to make room for a more accurate front 'slit' headlight.. dunno what else to call it.. 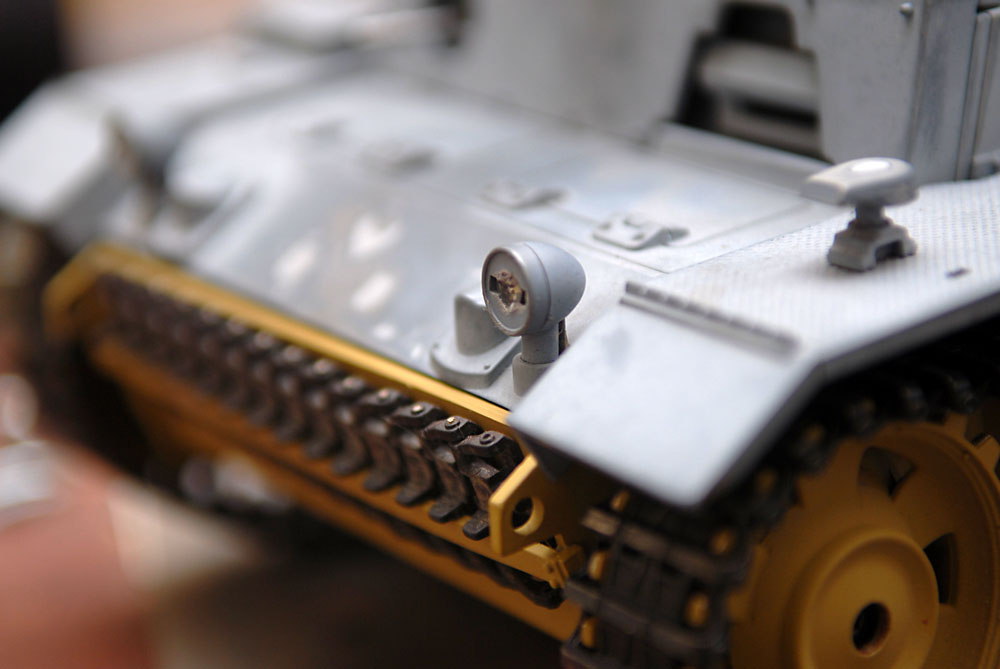 And last for now, the little holes on top of the turret are actually screws on the real tank, so I added screw lines with a scriber.  I need to clean a couple up a little, but it looks better. 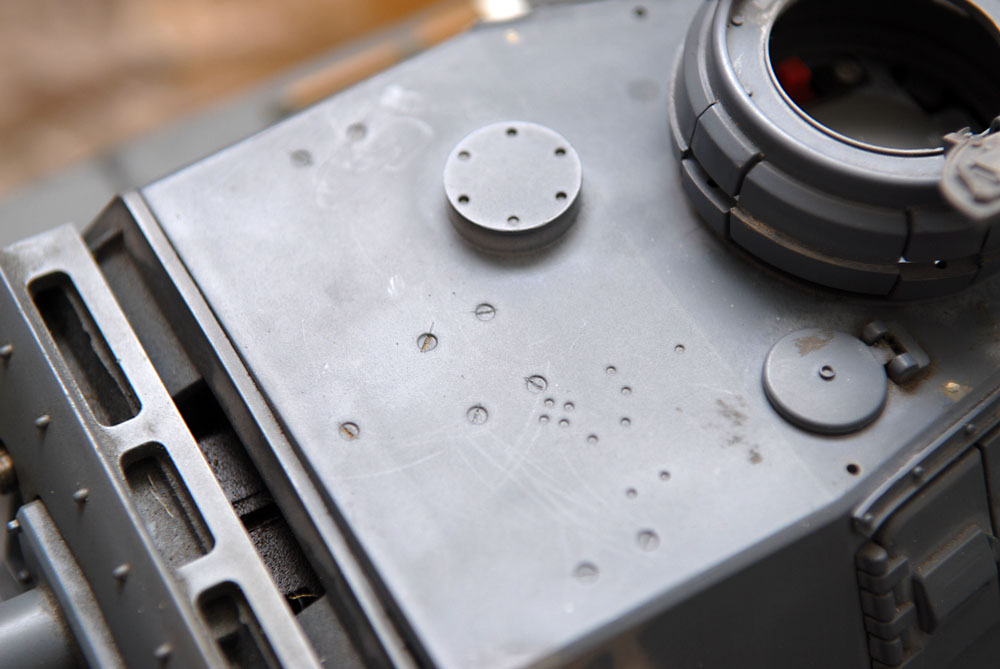