So, I'm about four blocks from my apt. Minding my own business on a two lane road, passing parked cars, I hear the squeal of tires as a car behind me slams on brakes. I swerve to the right since i'm just passing parked cars and I don't know what's going on behind me. I don't want to get rear ended, that's for sure. I look back now that i'm safe to the side, some guy is directly behind me, revving and braking alternately and honking. He turns right onto a street as we pass it, I slow down and glare, he stops, rolls down his window and yells in a thick Armenian accent, "Get out of my way, get on .. (indecipherable, assume 'on sidewalk') .. motherfucker!" We both go on our way, having lost about 5 seconds from our respective commutes.

What I wonder, is was that guy's anger worth the 5 second delay? 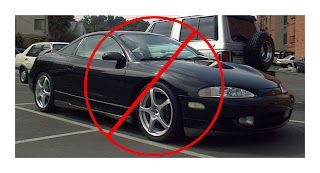 I own a car as well as my bike. It's a 1995, Mitsubishi Eclipse GS-T. I've had it since, maybe.... '98. It has a turbo and that makes it a fun car to drive. It looks nice when it's clean, it's fast, but it's the most unreliable piece of shit. It's a love-hate thing.. although, now that I hardly ever drive anymore, it's more of a hate. I've spent thousands of dollars on repairs over the years when something just breaks for no reason, and yes, it's for no reason. I don't even really drive it hard. I drive like a grandma because it's a gas hog. I've replaced the axle, maybe three times, the clutch, the clutch master and slave cylinders at least four times. Alternator, multiple sensors. I had to replace the entire engine head once, had to have part of the body welded because it cracked. I hate this car.. it's nickname is 'The Black Hole' because it's got that effect on my bank account.

I actually only drive it about once or twice a month now. Many moons ago I stopped driving it to work. What happened was my clutch broke and left me stranded in the middle of a busy intersection during a lunch break from work. I paid about 300 bucks to have that fixed, then just one week later, my alternator died, so I had that fixed, but too soon, I couldn't take it, I snapped.. I decided, fuckit, i'm riding the bus from now on. (then later started biking) Plus I just got sick of sitting in bumper to bumper L.A. traffic. My work is around 13 miles from my apt. It takes about 45 minutes to get there in my car because of traffic. In the afternoon, it can take an hour and a half on a bad day to get home, again, because of traffic. In comparison, my bike takes an hour each way, not much difference with the benefit of exercise and skipping the gym... the bus is about an hour and a half each way. The car is stressful... that's the main reason I stopped... and gas prices. If I drove my car to work, it'd cost me around $150+ a month. Bike is free, and exercise to boot... The monthly bus pass is $70, cheaper than gas, and can be ok, but because of the high gas prices (i'm assuming it's why) it's more crowded and I always have to stand now... it sucks.. I can't wait till my leg muscles are strong enough to bike every day.

I started typing this because tonight, the 2nd time i've driven this month, only once last month, the month before that, not at all.. .i'm taking my friend home from a bus stop and what happens.. the damn Check Engine Light comes on. The car just can't let me win.. I've only driven it around 150 miles since I got it serviced.. so what the fuck could be wrong with it this time? Mitsubishis officially break down for no reason, this is proof... damn it, i'll never buy one again.. i hate it.. damn Shitsubishi..
Posted by bhop73 at 9:48 PM 2 comments: 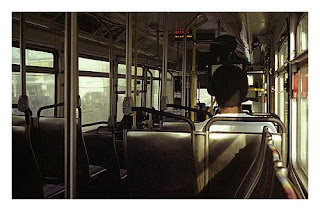 L.A. Metro. It's our city's public transportation system. Buses and trains. You see the advertising all over town to "Go Metro and save $$". They're trying to get people to realize that, yes, there is alternate transportation other than a car in L.A. It's true, it does work during usual work hours. I take the bus to work when i'm not riding my bike. It gets there in a reasonable time, and I can get home in a decent time as well, but anytime after work hours and you're screwed. The problem is the waiting. I don't know if the buses are just running less later at night or if they're horribly off shedule, but it sucks balls..

Example 1: Last Wed. I went out for some drinks after work with some coworkers. I left the bar/restaurant at around 7:30. At that time, my normal freeway bus isn't running anymore, so I have to take a couple buses instead of just one. No bid deal right? Wrong.. first bus comes quick, and before you know it, i'm at Pico/Fairfax, the location where I'll hop on the next bus. Well.. I have to wait for it I guess.... and wait some more.... and friggin' wait some more... eventually, at least 45 MINUTES LATER!! the bus finally came. (some old lady next to me was complaining too). So now it creeps up Fairfax at a snails pace, picking up and dropping off people. Eventually we get to Hollywood to find that the path is blocked because of a movie premiere so we have to go around, and traffic is fucked meaning that's an extra half hour of bus riding instead of what would've been about 10 minutes.. Ok, this isn't the bus's fault.. i'll give 'em that.. damn Hollywood! So to the point.. what takes me a little over an hour on my bicycle, just turned into a 2 hour bus ride... ugh...

Example 2: Last Night, Sunday July, 27. Gnarls Barkley played at the Hollywood bowl. My friend and I rode the bus down there because parking is a bitch, and the 217 bus is a straight shot to Hollywood/Highland. Worked ok, this was around 6:30. So after the show, 10:30-10:45.. somethin' like that. We're walking down and when we get to the red light at Hollywood/Highland, what do I see across the street? Our bus home... of course it leaves before we can cross the street and catch it. So now we decide just to walk down the street in the direction of home instead of waiting... we get to Vine Metro station and figure, surely a bus will be by soon.. at this point it's around 11:30-ish.. so about an hour after that last 217 bus. Still nothing in sight.. annoying as hell. We decide to take the subway train to Western and walk from there... we get into the subway station and the train takes about a half hour to get there.. so by the time we get home, it ended up taking us 2 hours.. that's only 2 miles away! We shoulda walked...

Go Metro indeed! So LA Metro wants people to take public transportation and that'd be great if it wasn't such a pain in the ass. Maybe i'm missing something, but it seems like they don't think about night life. I guess in the end, LA really is just a car town. 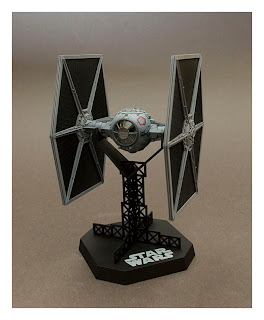 Well.. Here she is.. all finished. Painted with Tamiya acrylics. That's basically it..

more views:
rear view
side view
closeup of pod
Posted by bhop73 at 10:54 PM No comments:

MAN!! I've had my new bike for 3 days now, enough time on the saddle to know that I am in love with it. Today I commuted to work on it and holy smokes, what a difference from the ol' Huffy. I feel much better about riding with traffic because it's easier to keep up. On a couple downhill streets, I was actually going as fast, or faster than some cars. I couldn't do that with the Huffy because of the gearing (and the fear of it breaking on me). I love the bike. It was expensive, but worth it. Thanks Uncle Sam (stimulus check)
Posted by bhop73 at 8:50 PM No comments: 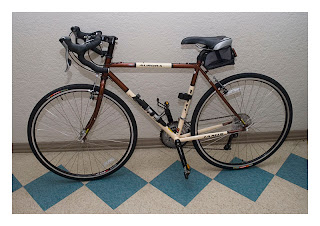 So, a couple months ago, I started commuting a couple times a week to work on my bike. (13 miles one way) My previous bike is a Huffy Ironman mountain bike. One reason was I just got sick of LA traffic. It actually only takes an extra 15 minutes to get there when I ride compared to driving, because of shitty traffic, although, I don't really drive anymore either. On the days I don't bike, I ride the bus, but that'd be another story....

Anyways.. I enjoyed riding, and the feeling of arriving at work after the ride, so much that I decided I wanted a new bike that was better built for the road than my old mountain bike. After deciding the type and testing a few different brands and models, I decided to go with the Jamis Aurora you see above. I got it from Hollywood Pro Bicycles, a small shop right on the Hollywood walk of fame. So far my dealings with them have been great, they've been pretty helpful to any questions I have and since it's new, it's got a year of free maintenance at the shop.

As you can probably imagine, going from a mtb to this road bike (touring bike technically) is like trading in an SUV for a sports car. (maybe not a Ferrari type sports car, more of a 350z :D ). Today I took it for a spin (and probably will go for a small night ride in a bit) and the bike is great. I'm so glad I got it.
Posted by bhop73 at 9:29 PM 2 comments: 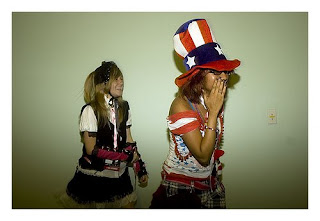 So, last weekend I went to Anime Expo. It was fun. I mostly walked around to the different video rooms and watched some anime that was showing. I also hung out with some friends that were there. One of the highlights of the weekend was watching the new Evangelion remake, in movie form. It was so much better than watching that long confusing series IMO. I took a few pics. 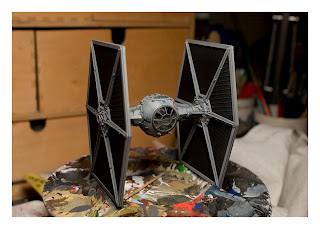 Ok.. I didn't want to have a new blog without something cool to put on it, so here's what i've been working on. It's almost done, this is just a sneak peek. It's the Fine Molds 1/72 scale TIE Fighter. It probably took only a few hours to finish, although it took me about a week and a half I guess... working on it in small bits only a few days. These Fine Molds kits just go together without hardly any work... but I like the painting stage the best anyway, so it works for me.
Posted by bhop73 at 10:32 PM No comments: 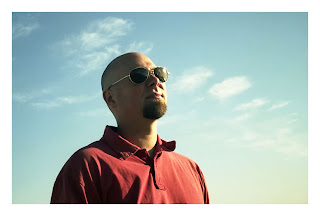 Well, here it is, Instead of updating my web site, I got lazy and just made this blog... That's it for now, i'll probably add some stuff later... oh..and dangit.. those glasses in the pic, I really liked them but they broke today, doesn't that suck?
Posted by bhop73 at 9:45 PM No comments: